BBNaija Reunion: Cross was a hypocrite who didn’t reciprocate my love – Angel 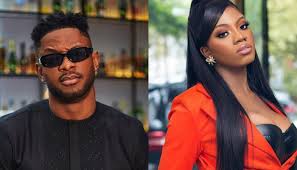 The tumultuous Cross and Angel relationship dynamic made the show’s spotlight topic for episode nine.

Show host, Ebuka Obi-Uchendu brought the housemates up to speed with video clips from the season featuring the duo flirting.

Unsurprisingly, both Angel and Cross agreed that the clips only proved that they were friends who enjoyed each other’s company despite the presence of sexual energy.

However, their relationship went downhill after the house. Both stars had a lot to say about who was to blame.

Angel had accused Cross of being a “hypocrite” and a “gaslighter” who did not match the love and energy that she brought to their strictly platonic, no friends with benefits or strings attached (for clarity) friendship.

The 22-year-old hinted at a long list of ‘all the things’ she had done for Cross including personally cooking for him when he was ill despite having a cook, crossing the fiery Third Mainland bridge to visit with him and offering him money when he ran out of cash during their Dubai trip.

Reacting to Angel’s accusations, Cross insisted he gave their friendship his best but did not care so much for answering her persistent call to share a list. Instead, he cited a period when she went missing for 72 hours only for her family members to involve the Police.

The back and forth ended with the duo insisting they no longer wanted anything to do with each other.

Episode 10 of the Reunion show will launch tomorrow and will centre on the Saskay and JayPaul situationship.