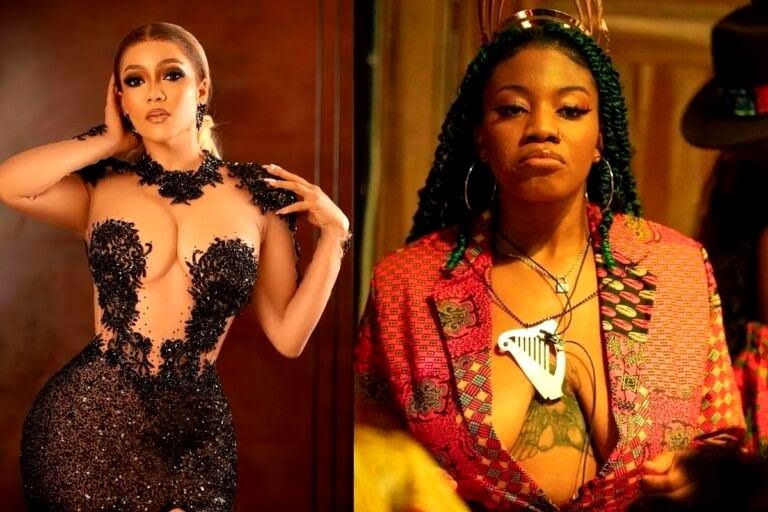 The Big Brother Naija ‘shine ya eyes’ reunion is getting more intense than expected. This is as housemate Maria was dragged by Angel for her relationship affair with a married man.

Angel Smith who’s still hurt after hearing all that was said and done behind her while she was in the house had borne out her mind as she spoke on the infamous Maria, Nini and Peace body shaming which had affected her mental health.

You would recall that during the show last year, the trio were in the executive room where they spoke Ill of their co-housemate, Angel.

Angel who clearly wanted to offload everything off her chest was seen speaking her mind when Maria decided to shut her up during the reunion,

Maria stated that she didn’t want to hear anything from Angel and she should direct all her aggression to Ebuka, the show host.

Angel : Okay me I have plenty things to say

Maria : So say that to Ebuka and other people because I’m not listening.

As the second episode aired, many were shocked that the drama between Angel and Maria was still been aired.

Their disagreement took a different turn when Maria brought in Kelvin’s name to the conversation.

Angel brought in Kelvin to tackle Maria for condemning her for something she does secretly.

Angel Smith said: “We can all agree that Maria is an hypocrite. I am talking about it because you were flirty with Emmanuel. Yes, I am a bitch, a fucking bitch, that’s great. I wouldn’t heal because you are a patriarchal Princess. You didn’t know that one when you were fucking married man. Fool”.

This has elicited reactions from the other housemates.

Maria who was trying to suppress her anger queried Angel for trying to divert the topic.

She warned Angel not to allow her bring up the dirty things she did in Dubai in the presence of all housemates.

“Really, is that what you wanna bring up. Don’t even allow me to bring up all the things you did in Dubai. Because you did it in front of everybody I know”.

Meanwhile, Boma Akpore has won the admiration of social media users as he admitted his mistakes to co-star, Angel Smith and tendered an apology to her.

Recall that while in the house, Boma and Angel had one of the nastiest fights as he hurled insults at her and her family.