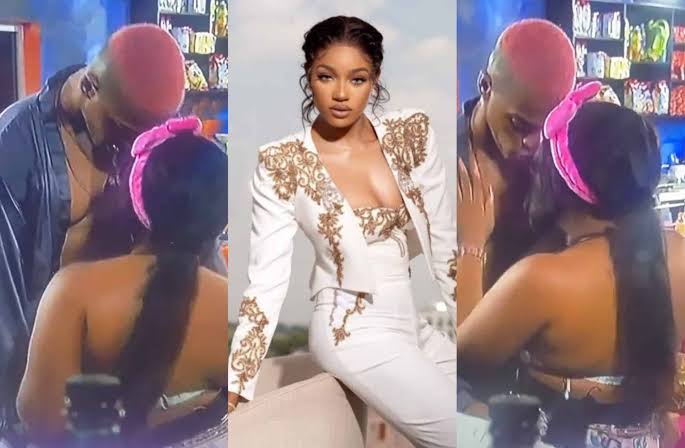 Amaka has kept to her words to destroy ships in the house.

The reality star who is in the Level Two house, fondly known as the Trenches, is definitely in the house to wreck her co-stars’ ship.

A woman of her words, Amaka got many talking as she tried to entangle herself in Groovy and Beauty’s ship.

On Thursday night, Biggie rewarded the Level One housemates for winning both Head Of House (HOH) and Head of Tail title (HOT) with a pool party.

Amaka, who seems to be interested in Groovy, rocking her bikini, blessed his eyes with her beautiful curves

Amaka got into a flirty mood as she whined, twerked, and rocked Groovy, who was sitting with his babe, Beauty.

Her action has gotten many talking as many questioned her motive.

bur_be_my: Na herself she dey punish

meh_nah_: But the boy is not feeling her nau

chaimurphyngo0: Amaka will not disappoint

unapologetically_a_queen: This S7 housemates I love their boldness

muditayo: Amaka wants groovy and she’s using wanting to scatter their ship as an excuse to get him

recalls that housemates, Groovy, and Beauty had gotten viewers’ attention with their loved-up display of affection.

Despite only being in the house for barely 48 hours, Beauty seemed to have found love and friendship with Groovy.

The two were one of the topped housemates on the lips of many with their loved-up moment.

Beauty, gradually getting out of her shell for the first time, moved closer to groovy to open up on her sleepless night.

During a conversation with Groovy, Beauty opened up about how she had been feeling ever since she got to the show.

The beautiful screen diva stated that she had been feeling cold.

She also opened up about how she had been trying to get along with her new environment and much more.

Her vulnerability had got many hoping for a green light between the two.