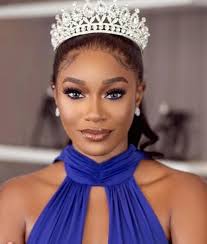 Announcing the punishment, Biggie said “Beauty, while the both of you overstepped your boundaries, you took it a little further when you charged at Ilebaye and proceeded to physically remove items from her body in what could be seen as a violent manner.”

After his aforesaid explanation, Biggie issued Beauty a strike while Ilebaye received a stern warning.

Recall that earlier the 24-year-old ex-beauty queen got into a brawl with Groovy for dancing with, Chomzy a level 1 housemate at the Saturday night party.

Beauty who is romatically involved with Groovy and she felt disrespected that her supposed man danced with another female housemate (Chomzy) she has issues with.

She, however, got more angry when Ilebaye tried to caution her against raising her voice.

While Beauty’s shouting and name-calling was ongoing, , Ilebaye said, ‘Just behave yourself,’ Beauty replied, ‘I should what??’ and the brawl started.

A video clip captured moment enraged Beauty walked up to Ilebaye who was seated at the dinning table and yanked off her wig.

Meanwhile, the ex-beauty was later summoned to the dairy by Biggie.

The rule of the reality TV show is against all forms of violence including provocation, goading, bullying and victimisation.