BBNaija Season 7: Bella vents out as housemates plot to break her relationship with Sheggz (Video) 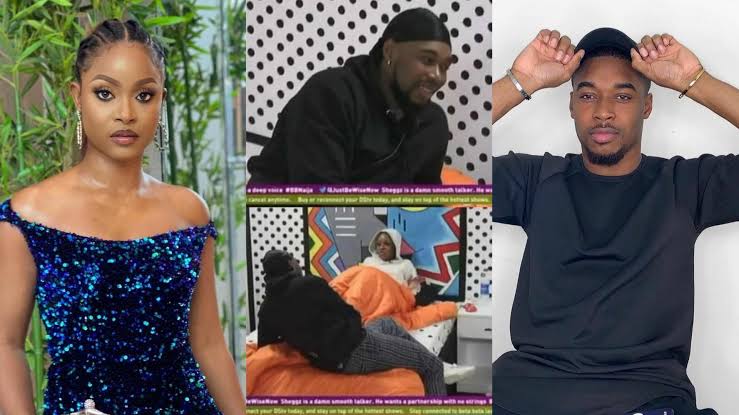 Big Brother Naija’s housemate, Bella has vented out over how other housemates are trying to break up her relationship with Sheggz.

Speaking with Sheggz, Bella questioned why ‘Level Two’ housemates were trying to advise him and trying to break them up.

Bella was referring to Doyin and Chichi who aren’t a fan of their ship. Doyin even admitted her feelings to Sheggz after they had a little misunderstanding.

Bella stated that they were trying to break them up because they also wanted the princess treatment that Bella was receiving from Sheggz.

Chipping in, Sheggz disclosed how housemates have been comparing their relationship with past housemates, Ozo and Nengi and Erica and Kiddwaya.

Bella: They are trying so hard to break us; who wouldn’t want the princess treatment? They see it, they want it, they can’t get it. Today made me see things clearly, they’re jealous and intimidated by me, even when I don’t have anything with them and that’s okay because I’m worth it.

Bella added: Why’re they always trying to advise you? They’re trying so hard to break us (Doyin and Chichi) who wouldn’t want the princess treatment?

Sheggz: they said people are watching me on TV right now.

Sheggz: Someone said we are like Kiddwaya and Erica. Doyin said its more like Ozo and Nengi.

Bella chipped in that they weren’t even in a relationship.

Bella: But this isn’t even a relationship

Doyin had earned praises from many as she openly admitted her feelings for Sheggz.

Putting away the stereotype, Doyin wasn’t shy to make the first move as she sat down with Sheggz to make her feelings known to him.

Doyin revealed that she liked Sheggz and could have moved more toward him if not for his public affection towards another housemate , Bella.

According to her, Bella was her stumbling block and was holding her back from reaching out to him.

Doyin stated that she would have been in Sheggz’s space every time if he wasn’t in a relationship.