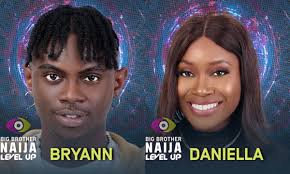 Bryann, a Level 2 housemate on Big Brother naija season 7, has criticized Daniella for recent under-the-duvet incidents in their home. After their relationship fizzled out, Daniella, who had started her ship with Bryann, moved on to Khalid.

Bryann claimed he had no idea she was so impoverished. Daniella and Khalid have been sleeping under the covers for a few days at this point. The most romantic relationship in the two houses of this season’s big brother can be said to be hers with Khalid.

There are about three ships on the show, but only theirs has progressed past simple communication and mutual feeding to include lying under the covers.

It is clear that Khalid is only dating her because he previously said that while he can date Christian women, he cannot marry them. He also stated yesterday that he is only concerned with money at home and does not care about love.

Daniella’s first housemate was Bryann, with whom she traded earrings on the first day of the big brother naija reality show. Their ship capsized after their first task, and she swapped Khalid right away. Since then, they have both been sleeping in the same bed and are frequently seen together to the point where level 1 housemates are aware of their ship.