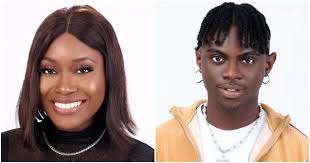 Undoubtedly, the seventh edition of the biggest reality show in Africa, Big Brother Naija, Level Up, has been packaged with interesting twists and turns.

The organizers of Big Brother Naija, season 7, Level Up, shocked the viewers when it unveiled another house for the second batch of housemates who entered the show on Sunday night.

The show also introduced another twist during the head of house game, stating there would be a tail of house.

The Big Brother Naija season 7, Level Up housemates, has been dishing out some interesting moves that excite the viewers.

A video that captured level up housemate Daniella returning a bracelet given to her by her crush ,Bryann.

This was after she spotted Bryann and another housemate having a cosy conversation on the former’s bed.

Mixed reactions have trailed this development as many wished the duo would be separated so they can concentrate on their various task. At the same time ,some declared that Bryann had served Daniella breakfast ( heartbreak)

lifeofjenny69: Breakfast na national cake e must touch everybody me i don chop my own since last night

da_archangel: Abeg it’s a game….no hard feelings. Bryann never said he wanted a relationship with her. Don’t get it twisted, i love them both… however, it’s still too early to judge.

hotgirlliz_: Bryan steady playing these girls to avoid getting nominated

cassiechy: They were still together this evening nah, make una no dey tag Bryann for anything relationship abeg, he only offered for friendship and if na me i will accept the friendship. The guy is so likeable