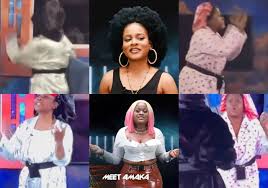 The ‘Level Up’could be termed a season of gbas gbos as things continue to get heated between the house mates.

It isn’t even up to a week, yet housemates are already exchanging words with each other.

A heated argument ensued in the first house between Phyna and Amaka.

What could have been a little misunderstanding between the ladies almost turned into a nasty fight, but for the intervention of Beauty and Bryan, the situation was calmed.

Narrating her side of the story, Phyna said Amaka told her she wanted to get into the minds of the other housemates.

This got Phyna scared and she made it known to Amaka that it was impossible to get into the minds of the housemates.

Trying to avoid making a big deal of her words, Phyna ignored Amaka, but the latter kept hammering on her words.

Irritated by her constant talks, Phyna called Amaka ‘Manipulative’ as she thinks that her thoughts seemed weird and manipulative.

Being called a ‘manipulator’ didn’t sit well with Amaka as she broke down in tears.

Amaka hit back at her with several unprintable words and a fight almost ensued if not for the intervention of other housemates.

recalls it was barely 24 hours since the second set of housemates stepped into the house, yet things had gotten heated between the housemates.

Bella and Chichi almost got into a big fight over a wager task.

Things went south between the ladies after Chichi dropped an idea for their wager task.

Chichi, who wasn’t there when Biggie passed an instruction to the housemate, made a suggestion for the group which didn’t sit well with Bella.

In a bid to draw Chichi’s attention to Biggie’s instruction, the ladies exchange words.

Biggie had passed an instruction that all members of the group must deliver a distinct talent for the task.

Trying to call her attention to it, Chichi who seemed to be the ‘bossy’ type took offense to her comment and slammed her.

To add to it, Chichi demanded a reshuffling of the group as she noted how those who were good at dancing were placed in a group.

Chichi requested that changes be made but Bella wasn’t having her authoritative personality.