BBTitans: “There Will Be Tears Next Week” – Netizens React As Nine Housemates Escape 1st Eviction 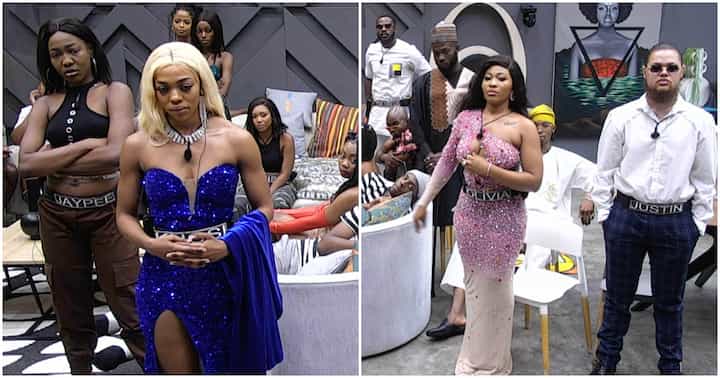 Big Brother Titans (BBTitans) first eviction show on Sunday night returned with the hosts Nigeria’s Ebuka Obi-Uchendu and South Africa’s Lawrence Maleka, who started with a review of the housemates’ experience during the week, which included the game activities, diary sessions, house party, among other dramas in the house. However, nine housemates were nominated for eviction and they were Blaqboi, Jaypee, Nana, Olivia, Yaya, Yemi Cregx, Jenni, Justin, and Khosi.

Towards the end of the show, Lawrence to the excitement of the nominated housemates’ announced that no one was evicted.

netizens predicted different scenarios next week, while others called for every housemate to be put up for eviction in order to make the show more interesting. See some of the reactions below:

ellenabareal: “Everybody should be put up next week.. the shellfish group who’re yet “come out of their shell” can go home and get comfortable. No time to waste! @BigBroAfrica #BBTitans2023 #BBTitans.”

“They are just setting demselves up for nominations cos shi is gon get real tomorrow cos they talk too much. Unnecessary yarns ooo #BBTitans2023 #bbtitans.”

iamlecgo: “HM’s should be little happy because all this nomination makes us see who is who so we can vote for our loved ones.Most nominations are full of hate or unfairness #BBTitans2023.”