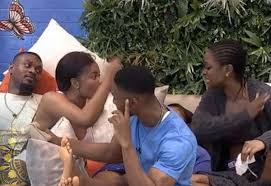 The BBNaija Season 7 edition has been witnessing some early mild drama as Bella and Chichi engaged in an altercation, a couple of days into the show.

Chi Chi asked for a change in the task’s routine, but Bella refused, claiming she (Chi Chi) was there when they all agreed. Bella stood her ground that they wouldn’t be changing anything.

It was the first clash among the level up housemates.

Meanwhile, fans have been reacting over the fight that ensued between Bella and Chi Chi.

Some fans on Twitter had this to say about their argument:

@Ppurplelover 2 people had an argument, but it’s only Bella you people blame?. Cook more oo. It will only make her stronger. #BBNaija

@spacesatp Lol Bella is obviously not a good dancer and chichi is trying to force her opinion on everybody. Bella is the content we signed up for #BBNaija

@ess_ther All I know is that ChiChi started giving orders from minute 1 yesterday. Someone finally changed it for her and suddenly it’s “Bella has an attitude” Mschewwwwwwwwww

@riri_ems When Bella was telling them to spread the dancers all around, they disagreed and said the dancers dance differently. Now chinchin wants to come and change everything when she was obviously present when it was being decided on now Bella is a bully for refusing the change?#BBNaija