Eloswag Makes Plans To Trigger An Altercation With Phyna, Says He Wants To Fight With Her 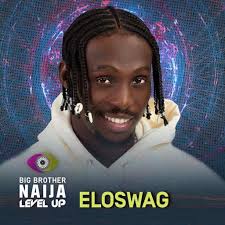 Big Brother Naija level up housemate, Eloswag has revealed that he would like to have an altercation with fellow housemate, Phyna.

In a clip, he was spotted having a discussion with Sheggz, who was sweeping the bedroom. Eloswag told Sheggz that he would like to have an altercation with Phyna during their stay in the house. Sheggz told him that Phyna likes to have issues with people which is why she is always arguing in the house. In response, Eloswag said that he understands the kind of person she is and would like to trigger her to anger. He also claimed that he is not going to be violent but would love a fight to happen between them.

Viewers are wondering how bad Phyna and Eloswag’s friendship has gotten to the extent that Eloswag wants to intentionally piss her off. During the first few weeks of the show, the duo couldn’t seem to get their hands off each other during the Saturday night parties. They even shared a kiss on several occasions in the presence of other housemates.