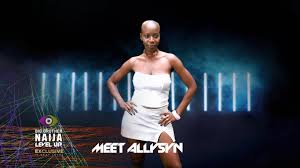 Evicted Big Brother Naija Season 7 Housemate, Allysyn, has opened up about her relationship with her colleague, Hermes.

Recall that the ‘Level Up’ Housemate during a recent interview, said her feeling for Hermes while in Biggie’s house was genuine and it is still genuine.

The black-skinned model noted that she understands Hermes’ polyamorous relationships dynamic, prior to the reality TV show.

However, she is going to leave everything open and cannot say much about what would happen to them.

In her words: “My feelings for him are genuine and we are genuine and always be genuine, will I want to join Hermes’ relationship tribe? Well, to be honest, it is something I have grown to understand, I understand it completely.

“But will I want to join it? To be honest, I can’t say, for now, I’m just going to leave it open I really don’t know what it’s going to be like but I understand the dynamic and I’m fine with it.”