“Phyna is like a mother to me” – Groovy tells Chomzy. 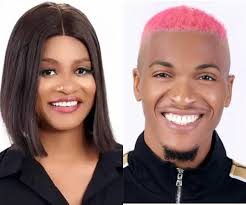 The big brother naija housemate, Groovy has revealed that his supposed lover, Phyna is like a mother to him. He revealed this during a conversation with Chomzy.

Groovy who was recently transferred to level 1 asked Chomzy if she was single, she said yes and Groovy asked her about Elloswag, she said Elloswag is like a brother to her. When Chomzy asked Groovy about Phyna, he said Phyna is like a mother figure to him.

This caused lot of reactions online, many people said they know Groovy doesn’t love Phyna that he is just catching cruise with her, while others said they are just playing themselves.