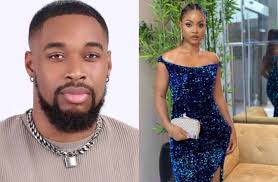 Big Brother Naija Level Up housemate, Sheggz, has revealed his intentions for Bella after the Reality TV show. He said that he would like to get married to his love interest (Bella) after the show.

He made the revelation during a discussion will Dotun, which was the subject of a social media update by BBNaija Season 7 Live News. He was said to have told Dotun that he would like to marry her after the show. His fellow housemate told him not to rush things.

The facebook update had a message that conveyed their conversation as follows;

Sheggz: I wanna get married after the house!

Dotun: don’t put pressure on it

Sheggz and Bella have established a stable ship over the course of the show and the admission that he intends to start processing Bella’s passport is an indication of his love for her.